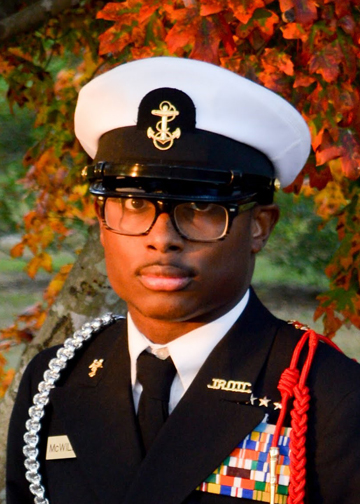 Devique had a rough start in life. At only six weeks old, he was diagnosed with meningitis, an inflammation of the membranes surrounding the brain and spinal cord. His doctors predicted he would die. This was the first time Devique would demonstrate his inner strength. He did not die.

Because of the condition, Devique’s speech and learning abilities were delayed. He did not begin talking until he was 6 years old. The doctors said he was autistic and would have to take special classes. Devique’s parents declined this offer, convinced that he could catch up. They were right. With their help, Devique not only caught up to the students his age, but he quickly surpassed many of them in his academics. In his nomination of Devique as a Young Hero, W.H. Davidson High School senior Naval Science instructor Capt. Tom Daniel, USN, Ret. wrote, “Devique often thinks about the struggles of his childhood and uses those experiences to motivate him toward a brighter future.”

In addition to these early struggles, Devique has a sickle-cell trait and is allergic to wheat. Devique’s mother also struggles with many health issues of her own.

Devique undertakes many responsibilities around the house and at school, while simultaneously seeking employment opportunities to help his family. At school, he attends classes, maintains a 3.5 grade point average and works on college applications. He tackles the many challenges in the NJROTC (Naval Junior Reserve Officer Training Corps) program, including attending meetings to discuss occupations and setting monthly program goals for personal improvement. Devique also attends NJROTC practices and instills knowledge, good character and healthy lifestyle habits to the cadets.

Devique maintains a significant role in his fraternity, the Alpha Elites. The fraternity visits churches, nursing homes and colleges, helps with community projects, and works to serve the needy.

From the day of his birth until today, quitting was never an option for Devique. In honor of his dedication and his unstoppable will to overcome and succeed, Devique is recognized by his school and our state as one of the five 2018 Young Heroes of Alabama.