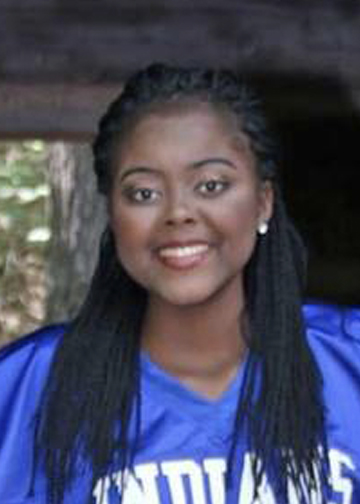 Denver, now a senior at Cherokee High School, was diagnosed with lupus when she was in the 8th grade. Lupus is a systemic autoimmune disease that causes a body’s immune system to attack its own tissues and organs. Inflammation caused by lupus can affect many different body systems—including joints, kidneys, blood cells, the brain, the heart, and the lungs. In spite of this diagnosis, Denver remained actively involved at her school and excelled in academics, athletics, cheerleading and multiple extracurricular activities.

In January of her sophomore year, Denver experienced something uncommon for people her age—a stroke. It was a huge setback for such an active young woman. The stroke left her with brain damage that made it look as if she would be unable to resume her previously active interests. She was in the hospital for two weeks and then spent most of the remainder of the school year as a homebound student. Denver had to relearn many abilities and tasks that are often taken for granted; like walking, talking, brushing your teeth, and feeding and bathing yourself. Loss of her short-term memory and her ability to read and retain new information, as well as the loss of her athletic abilities, were new hurdles to overcome.

Denver was determined to overcome the effects of the stroke. As soon as she was able, she began working hard in therapy and carefully following the instructions of her doctors. Slowly, progress was made. By the end of the school year, Denver was able to return to school for a couple of hours each day. Working hard through the summer, Denver returned to school full-time in the fall.

Back on course, Denver was again playing volleyball, basketball and softball, as well as cheerleading. By her senior year, she was the captain of the cheerleading squad, and the varsity volleyball and softball teams, as well as president of the Student Council and her school’s chapter of the Fellowship of Christian Athletes. She is ranked 6th in her senior class of 50 students.

In her nomination of Denver, Cherokee High School guidance counselor Julia Gray wrote, “When I think of Denver, I think of a young person who is an overcomer with a new outlook on life and a new reason to live. She explores her options for the future and takes the necessary steps to reach her goals. Things are still not easy for Denver and probably never will be, but she will be a success and a productive member of society because she cares enough to give her best.”

Denver plans to attend college and to pursue a career as a neonatal nurse. Nothing can keep this young lady down. For her perseverance and determination in the face of extraordinary circumstances, Denver is recognized by her school and our state as one of the five 2018 Young Heroes of Alabama.