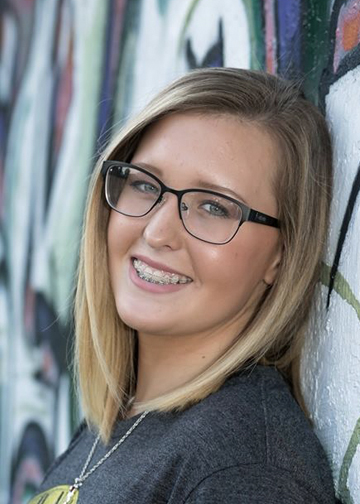 Brie is a senior at West Morgan High School. An outstanding student with a resume filled with community and school achievements, Brie is a shining example of excellence in scholarship and service—and few could imagine the obstacles she has already faced in her young life.

When Brie was two years old, her mother and father divorced because of her father’s drug and alcohol addictions. Following a period of unstable visitations, his custodial rights were revoked due to continued abuse of drugs and alcohol. For ten years, Brie’s father came in and out of her life. Eventually, his journey of addiction led him to a felony theft arrest and a prison sentence.

She plays varsity volleyball and basketball. Brie is active in numerous clubs and organizations in her school, including the Student Council, the FCCLA, the Service Club, Big Brothers/Big Sisters, and the National Honor Society – among many others.

Brie was selected as a recipient of the Joe Wheeler Youth Tour scholarship and, most recently, the Better Business Bureau’s Torch Award scholarship based on an essay she wrote on the importance of ethics in the workplace. She is a recent Bryant Jordan Scholarship nominee and an Elks Foundation Most Valuable Student state nominee. Brie’s future plans are centered on becoming a veterinarian. To that end, she volunteered at a local veterinarian’s office after her basketball season in 2017, and plans to continue to volunteer until she can find a job in that field. Now that her senior basketball season is over, she plans to replace her athletics period with co-op, traveling each day to volunteer her time at the veterinarian’s office.

Brie’s father was recently released from prison, and she has shown her trademark grace and forgiveness as she slowly attempts to rebuild their relationship. Her nominator, West Morgan High School counselor Natosha Banks, wrote of Brie, “Of all the things that impress me about this young lady, her character is what really stands out. Brianna’s kind heart and morals shine through her character every day.”

In her community, Brie has volunteered for her church’s Vacation Bible School program and spent two summers working with Builders for Christ, an organization that helps churches build needed structures for low costs. She participated in Young Minds at Work, a STEM education program sponsored by Lockheed Martin of Huntsville.

When faced with obstacles in her personal life, Brie responded with determination and excellence in the areas of her life that were in her control. For all these reasons and more, Brie is recognized by her school and our state as one of the five 2018 Young Heroes of Alabama.