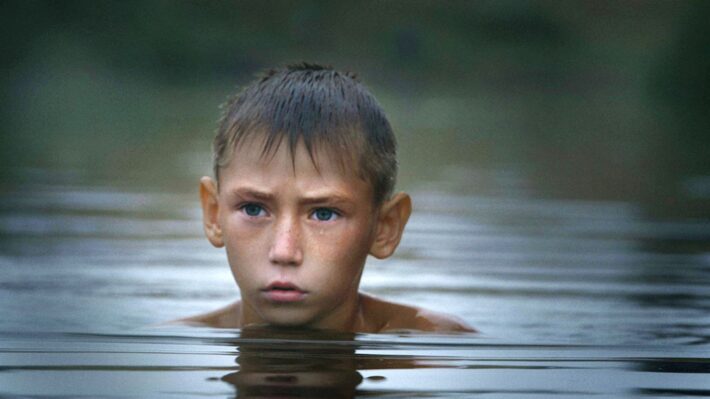 The Distant Barking of Dogs

Film follows a year in the life of a 10-year-old Ukrainian boy growing up amidst the upheaval in Eastern Ukraine prior to the Russian invasion.

WATCH NOW or find it on the PBS Video App.

"When the first explosions sound, after the cannons have fired, it feels like a hand starts squeezing my heart. Then it gets all little and cold, too.”

Those are the words of Oleg, who lives with his grandma in a warzone in the eastern part of Ukraine, less than one mile from the frontline.  Director Simon Lereng Wilmont said he knew he'd found the subject for his film when he spoke to Oleg while doing research in the Donbas region, an area that has been contested by separatists supported by Russia since 2014, around the same time as Russia's annexation of Crimea.

"Soon after (meeting Oleg) , I met his grandmother, Alexandra, an amazing, loving and strong woman," Wilmont says. "It was obvious how close and special the bond between the two of them was. Their house still showed signs of shelling and desperately needed repairs, but it was filled with warmth and laughter. A lot of the people in the village had been displaced, including many close friends and relatives, leaving behind a vacuum of activity where time did not exist. But there was always a warm meal ready and a good story waiting to be shared in their house. Life was calm and beautiful, as it should be. For a second, you almost forgot about the war. Staying there long enough, though, I soon realized that this bubble of safety was just an illusion. A brittle illusion that could shatter violently and often unexpectedly to reveal the very real and dangerous world that Oleg and Alexandra really live in."

POV presented "The Distant Barking of Dogs" five years ago and has made the film available again to provide perspective on the human costs of the conflict in Ukraine.

With war raging across the country, nowhere in Ukraine is safe.  Lereng Wilmot and Danish producer Monica Hellström (Flee, The Distant Barking of Dogs, A House Made of Splinters) joined forces with their assistant director, Azad Safarov, and local production coordinator, Lena Rozvadovska, to successfully evacuate the film’s two protagonists.

POV Resources for "The Distant Barking of Dogs"