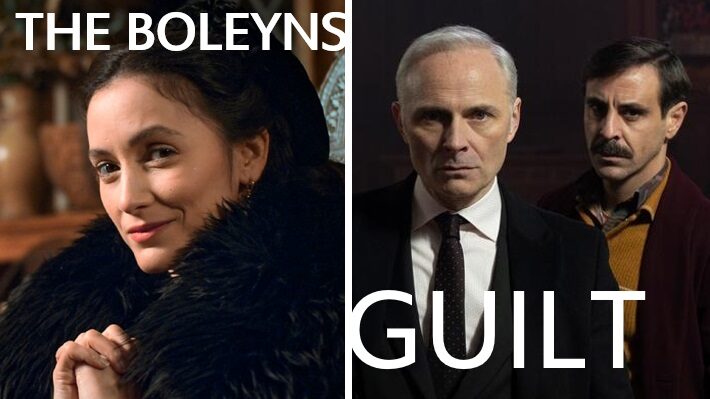 Explore the backstory of Anne Boleyn and follow the twists and turns of life for brothers Max and Jake McCall following a term in prison as MASTEREPIECE presents Guilt Season 2.

Everyone knows the story of Anne Boleyn after she became Henry VIII's lover and queen. But what brought Anne to the English court in the first place? And what role did her ambitious family - and their rivals - play in her rise and tragic fall? Discover the answer in a new three-part series beginning on Sunday. Then, Mark Bonnar and Jamie Sives reprise their roles as Max and Jake McCall, the brothers who accidentally ran over someone while driving drunk and tried to cover it up. Guilt Season 1 won the 2020 British Academy of Film and Television Arts Scottish branch (BAFTA) Award for Best Drama, so expect high things from Season 2.

Elizabeth McCafferty stars in this documentary tale of England's most scandalous royal family. Anne Boleyn, second wife of Henry VIII, is infamous, whether it is true or not, as the seductress who drove out Queen Catherine and caused England to abandon the Catholic Church. The Boleyns: A Scandalous Family explores Anne's family of birth and the family she married into, what made them tick, and what led to their uniquely unpopular place in English history.

MASTERPIECE's award-winning drama Guilt returns for a second four-part season full of twists, turns, and deceptions. High-flying lawyer Max McCall is released from an Edinburgh prison. Across town, two gunshots ring out. As Max and brother Jake try to rebuild their lives, the connection between these events becomes clear and threatens to draw the duo deeper into a life of crime. Two-episode premiere!

Watch past episodes of Guilt on Masterpiece with Passport and enjoy Season 2 episodes beginning on Sunday!