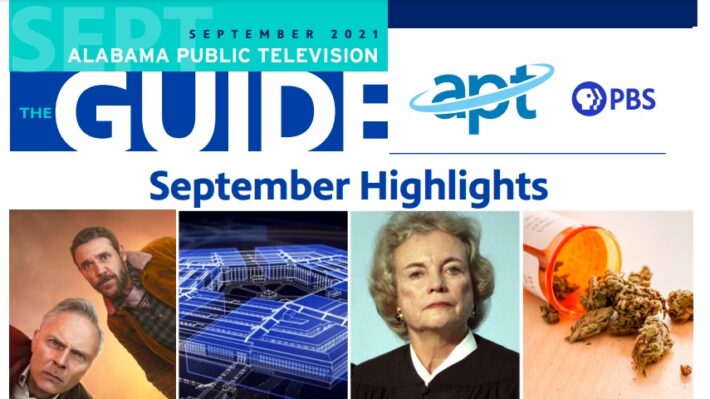 View or download Alabama Public Television's September 2021 Guide to see what's coming your way in the next few weeks!

Two brothers are involved in a hit-and-run accident and then go to incredible lengths to cover it up in the the dark tale Guilt, Sunday nights on MASTERPIECE in September.  We remember the 20th anniversary of the September 11 terrorist attacks with a series of specials, 9/11 Inside The Pentagon, Frontline: America After 9/11, and Generation 9/11, an intimate portrait of seven young people whose fathers died in the attacks. AMERICAN EXPERIENCE tells the story of Sandra Day O'Connor, the Supreme Court's first female judge, and NOVA explores the growing popularity, medicinal uses, and possible long-term health consequences using marijuana in The Cannabis Question.

The biggest story for this month though, is the premiere of MUHAMMAD ALI, a film by Ken Burns, Sarah Burns and David McMahon.  This eight-part, eight and a half hour series is much more than a boxing story. Burns delivers on his reputation as one of the great documentary filmmakers of all time with a film that studies Ali, religion, politics, sports and culture. The series will be broadcast over four nights, Sept. 19-22 at 7:00pm and repeated on the same nights. Download this month's  GUIDE to learn more.