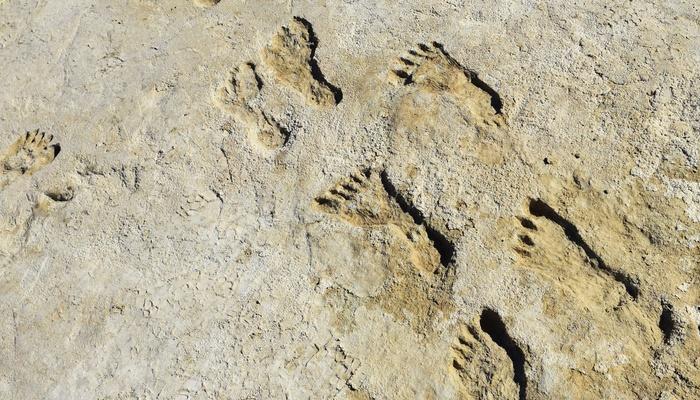 A look at what thousands of prehistoric footprints in New Mexico's White Sands National Park might reveal about the peopling of the Americas.

Ancient footprints recently found in New Mexico’s White Sands National Park could be the earliest evidence of humans ever found in North America. NOVA: ICE AGE FOOTPRINTS follows a team of archaeologists as they investigate the remarkable footprints which they date to 21,000 years ago, indicating  humans were present in North America much earlier than previously thought.

These footprints include tracks from 13-foot-tall mammoths, huge ground sloths, packs of dire wolves, and camels. Alongside them, though, is something even rarer—footprints of humans that have been buried for thousands of years and are gradually being exposed by wind erosion. The film uses immersive 3-D graphics to bring viewers face to face with some of the magnificent creatures that roamed North America during the last Ice Age–animals that went extinct more than 10,000 years ago–while revealing an untold story of human history on the continent.

Hosted by Kirk Johnson, the Sant Director of the Smithsonian National Museum of Natural History, ICE AGE FOOTPRINTS captures the work of a team of archaeologists and other scientists led by White Sands National Park Resource Program Manager David Bustos as they try to unlock the secrets of these extraordinary prints before they erode to dust. Among the questions they’re trying to answer are: Who made them? How old are they? And what can they tell us about the long history of humans in North America?

ICE AGE FOOTPRINTS brings viewers an exclusive behind-the-scenes look at some of the astonishing stories hidden in these tracks, as footprints can reveal intimate details that no bones ever could. One fascinating set of footprints excavated by forensic footprint expert Matthew Bennett tells the story of an individual making a journey and then coming back later the same day. Forensic analysis of the prints shows the person was in a hurry, and—as revealed by a set of much smaller tracks at one point along the path—they were carrying a child. Later, their track is crossed by the prints of an enormous ground sloth, which appears to rear up on its hind legs—possibly to sniff the air as it detects humans—a scene that reveals just how close humans and Ice Age animals came to one another.

While the dramatic findings may be surprising for some scientists, for many Indigenous people, they are confirmation of long-held beliefs. “The tribes talk about going way back. We all talk about having been here forever,” explains archaeologist Joe Watkins, a member of the Choctaw Nation of Oklahoma, in the film. “We have the evidence. It really does put our feetprints firmly into the past here in North America. These are our relatives.”

ICE AGE FOOTPRINTS also features Kim Pasqual-Charlie, Tribal Historic Preservation Board Member of the Acoma Pueblo of New Mexico, who speaks about the significance of the footprints to her community; and Edward Jolie, archeologist and citizen of the Muscogee Nation of Oklahoma, who together with Joe Watkins and archaeologist Carol Ellick, investigates some of the ancient technology that might have been used by the Ice Age inhabitants of the area to transport heavy loads, including the meat of giant mammoths.