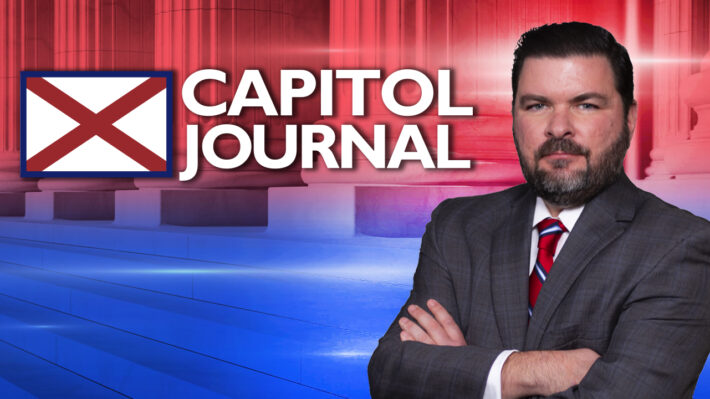 Alabama Public Television’s public affairs series CAPITOL JOURNAL begins 2022 with a new host on January 7. Todd Stacy, a Montgomery resident and publisher of Alabama Daily News, takes over from Don Dailey who retired in December after 10 years in the anchor’s chair.

Stacy joins CAPITOL JOURNAL’s veteran reporters Karen Goldsmith and Randy Scott just as the Alabama Legislature begins it’s 2022 regular session. The team will report daily on action in the Alabama House and Senate from APT’s Statehouse studio, interviewing lawmakers, the governor and other state leaders Monday-Thursday nights at 10:30pm and Fridays at 7:30pm.

“I’m grateful to the Alabama Public Television leadership for their confidence in me to host such a meaningful news space in Alabama politics,” Stacy said. “I grew up watching APT and have enjoyed working with their team professionally over the years. It’s more than a little intimidating to fill the shoes of Don Dailey, who is a mainstay at the State House and universally well respected, but I’m honored by the opportunity and eager to get started.”

A veteran of both Washington, D.C. and Montgomery politics, including work for former Gov. Bob Riley and former U.S. Rep. Martha Roby, Stacy launched Alabama Daily News in January 2018. Stacy will continue as publisher in addition to his role at CAPITOL JOURNAL.

“We are excited to welcome Todd Stacy to the team,” said Phil Hutcheson, interim executive director and CFO of Alabama Public Television. “Viewers can rely on CAPITOL JOURNAL for straight-forward and balanced coverage of news from Montgomery and around the state and the most in-depth television coverage of the Legislature available.”