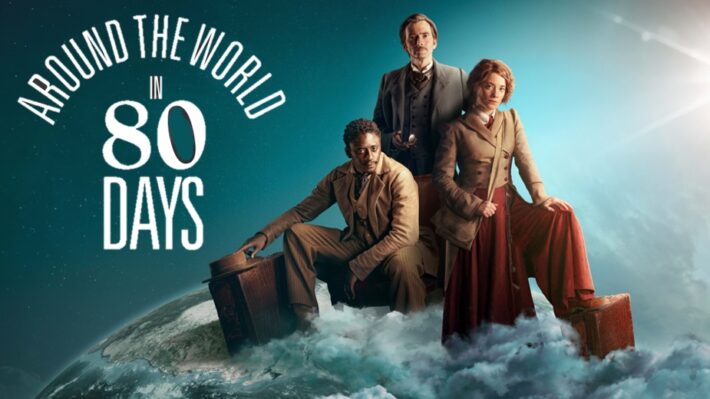 A millionaire bachelor stakes a fortune on circumnavigating the globe in 80 days in this new take on Jules Verne's classic adventure tale.

Literature’s most famous race against the calendar comes to MASTERPIECE in 2022 with an innovative new adaptation of Jules Verne’s classic novel Around The World In Eighty Days, airing on MASTERPIECE in eight thrilling episodes airing Sundays, January 2 - February 20, 2022 . David Tennant (Doctor Who) stars as the Englishman who bets a fortune that he can circumnavigate the planet in a mere eighty days—quite a feat, considering that it’s 1872. Ibrahim Koma (As Far as I Can Walk) and Leonie Benesch (Babylon Berlin) costar as his intrepid traveling companions on an expedition that packs far more adventure than the trio bargained for. This captivating tale is brought to life by UK production house Slim Film + Television and French production company Federation Entertainment.

Updating Verne’s enduringly popular tale, MASTERPIECE introduces new themes, characters, and stories, drawing in part on the author’s own personal history of disappointment in love, and also echoing the recordbreaking around-the-world trip in 1890 by journalist Nellie Bly in  emulation of Verne’s plot.

Shot on location on two continents, the miniseries follows our heroes as they head east from London on October 5, 1872, intending to make it back to the reading room of the city’s snobbish Reform Club no later than one o’clock on Christmas Eve. En route, they take ships, trains, balloons, camels, stagecoaches, and other conveyances, while meeting increasingly dangerous obstacles. At stake is a wager of 20,000 British pounds, equal to over $3 million in today’s U.S. currency.

The idea for the trip is sparked by a news article reporting a recently finished railway line in India that completes an unbroken chain of modern transportation links spanning the globe, making it possible to circle the planet in eighty days— at least, in theory. Phileas Fogg (Tennant), a diffident bachelor and regular at the Reform Club, muses longingly about the possibility and is goaded by his old antagonist, Nyle Bellamy (Peter Sullivan, Poldark), into undertaking the journey, with a hefty bet riding on the outcome.

Deciding that his octogenarian butler (Richard Wilson, Merlin) is not up to the voyage, Fogg recruits a new valet, Passepartout (Koma), who is a sharp-witted French wanderer, and they immediately set forth. Doggedly following their trail is the ambitious reporter of the story that launched the adventure, Abigail “Fix” Fortescue (Benesch), daughter of British newspaper magnate Bernard Fortescue (Jason Watkins, The Crown). Fogg soon concludes that he can’t get rid of Abigail and enlists her as an official member of the expedition. Fogg, Passepartout, and Abigail experience revolution, starvation, false arrest, surreptitious drugging, life-threatening attacks, and stranding on a desert island, among other perils. Clearly, fate—or somebody—does not want Fogg to win his bet!