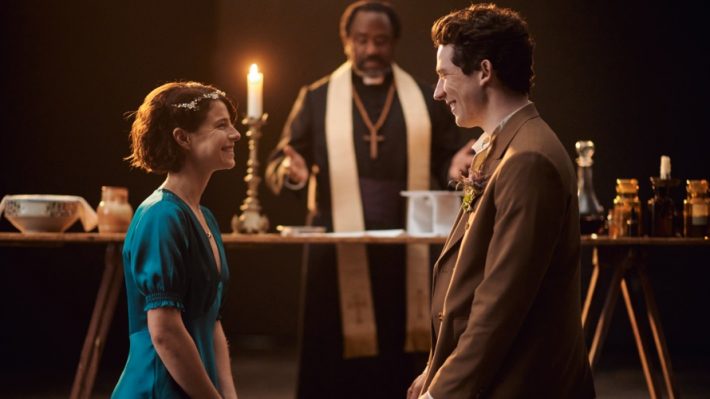 Britain's National Theatre presents a new interpretation of Shakespeare's "Romeo and Juliet" set in the modern day. Starring Josh O’Connor (The Crown, Masterpiece: The Durrells in Corfu) and Jessie Buckley (Fargo, Chernobyl) as Romeo and Juliet.

An original film for television by the National Theatre, Great Performances: Romeo & Juliet celebrates the theatrical imagination, moving from the stripped-down aesthetic of a rehearsal into a cinematic journey that embraces the architecture of the theater space and varied backstage spaces of the National’s Lyttelton Theatre. In this contemporary rendering of Shakespeare’s romantic tragedy, a company of actors in a shuttered theater bring to life the tale of two young lovers who strive to transcend a world of violence and hate.

Starring Josh O’Connor (The Crown, Masterpiece: The Durrells in Corfu) and Jessie Buckley (Fargo, Chernobyl) as Romeo and Juliet, the production is directed by Shakespeare Theatre Company Artistic Director Simon Godwin and is adapted for television by Emily Burns.

“During the ongoing performance shutdown in London and New York, we’re delighted to participate in this compelling hybrid of theater and film that brings an exciting contemporary perspective to one of Shakespeare’s most iconic plays,” said Great Performances Executive Producer David Horn. “We’re thrilled to continue our partnership with the National Theatre.” The series broadcast the National Theatre’s production of One Man, Two Guvnors in November 2020 as part of its fourth annual “Broadway’s Best” lineup on PBS.

“Shakespeare's potential for reinvention is endless,” said director Simon Godwin. “Over 17 days of filming, the company was united by a sense of shared exploration. As well as being given intimate access to the thoughts and feelings of characters, we were able to bring to life remarkable, forgotten spaces at the National Theatre. Desire, dreams and destiny came together to make Romeo & Juliet sing in an entirely new way.”

Others in the ensemble cast include Fisayo Akinade as Mercutio, Shubham Saraf as Benvolio, Deborah Findlay as the Nurse, David Judge as Tybalt, Alex Mugnaioni as Paris, Ellis Howard as Sampson, Tamsin Greig as Lady Capulet, Lucian Msamati as the Friar, Adrian Lester as the Prince, Lloyd Hutchinson as Lord Capulet, Colin Tierney as Lord Montague and Ella Dacres as Peta.