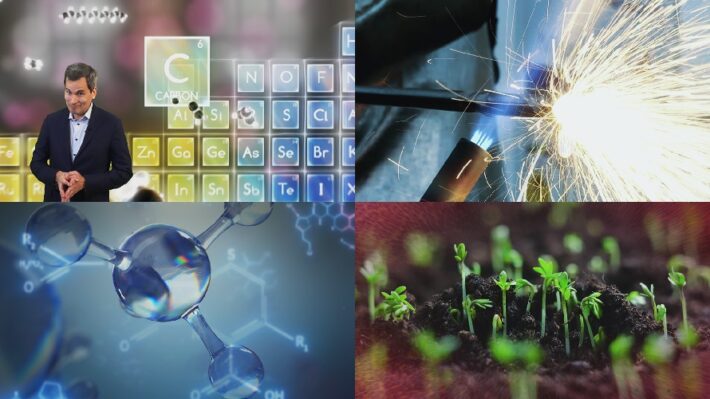 Science writer David Pogue sets out on a worldwide quest to find the key molecules and chemical reactions that have paved the way for human civilization, life, and even the universe as we know it.

Picking up where he left off in NOVA’s popular special, Hunting the Elements, David Pogue sets out on a worldwide quest to find the key molecules and chemical reactions that have paved the way for human civilization, life, and even the universe as we know it. And along the way, he uncovers the simple principles that produce such a dizzying diversity of matter from elements on the periodic table.

Just about every solid, liquid, or gas in the world as we know it begins with reactions between individual atoms and molecules. In the premiere episode, "Reactions," Pogue dives into the transformative world of chemical reactions, from the complex formula that produces cement to the single reaction that’s allowed farmers to feed a global population by the billions—a reaction that when reversed, unleashes the powerful chemistry of high explosives.

In episode 2, "Indestructible," Pogue explores the fantastic chemistry behind the everyday materials we depend on, and how the quest for durability can be balanced with products’ environmental impact. Scientists and engineers have created virtually indestructible versions of common materials by manipulating the chains of interlocking atoms that give them strength—but have they made them too tough? See glass so strong you can jump on it, a rubber-like coating tough enough to absorb a bomb blast, and endless varieties of plastic.

Finally, without the chemistry of photosynthesis, ozone, and a molecule called Rubisco, none of us would be here. So how did we get so lucky? In the final episode, "Life," host David Pogue investigates the surprising molecules that allowed life on Earth to begin, and ultimately thrive. Along the way, he finds out what we’re all made of—literally.