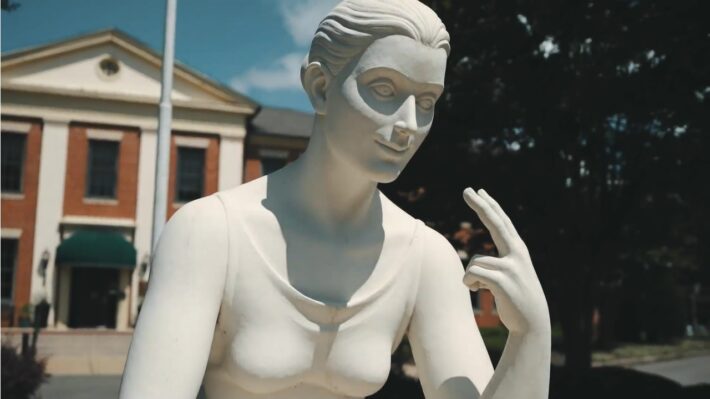 Alabama Institute for Deaf and Blind

The Alabama Institute for Deaf and Blind (AIDB) is the world’s most comprehensive education, rehabilitation and service program, serving individuals of all ages who are deaf, blind, deaf-blind and multi-disabled. A new documentary from Alabama Public Television takes viewers inside AIDB to explore and better understand this extraordinary community and those it serves.

Founded in 1858 by a young medical doctor who wanted to educate his deaf brother, AIDB now serves more than 36,000 infants, toddlers, children, adults and seniors with hearing and vision loss throughout Alabama each year. In Talladega, AIDB now has six campuses, including Alabama School for the Deaf, Alabama School for the Blind, Alabama Industries for the Blind, Helen Keller School, E.H. Gentry Facility, and the Marianna Greene Henry (MGH) Special Equestrian Arena.

Danny Ray Finley, a graduate of AIDB and Director of Student Life at the Alabama School for the Blind, takes viewers to a gymnasium where wrestlers are practicing. A sign in the gym displays a long list of state and national champion wrestlers from the school. Finley says the school also offers track, swimming, cheerleading and other programs.

“We offer a structured program for the students to learn the skills they need, whether it be independent living skills, cooking, how to grocery shop,” says Finley. “No teenager appreciates structure while they are going through it,” he says with a smile, “but once they get older and leave here, that’s when all the skills they’ve practiced really kick in.”

Finley says that having been through the process at AIDB as a student really makes him appreciate all the things he learned there. “The things that I felt like I missed myself as a child I’m now able to give those things to children that look like myself, and also my own.” It’s rewarding, he said, to work with people who are dealing with the same life problems. And the instruction that is specifically geared to students with a visual impairment makes a tremendous difference in their ability to learn a subject.

Alabama School for the Blind senior Rachel Hyche is very candid about how the school has changed her life. Hyche spent years going to public school and says she always felt like an outcast. At ASB she found a much more open and understanding community and her parents both commented on how much more social she became there – and happier. Hyche talks about her personal learning style and the importance of 3-D models in understanding subjects. She also shows off the technology that transforms the writing on her phone or computer to a Braille dots keyboard display so she can read it.

“I love being here. Staying here on the weekends is amazing because I get to hang out with my friends. I literally get to have a sleepover every night and wake up in the morning and go talk to my friends. It’s like going to summer camp every day.”

Cade Henson was a student as ASB from kindergarten on and is now doing college prep at the E.H. Gentry Facility Services for the Deaf. He explains through an ASL interpreter how the Gentry facility has helped him remediate some of his academic skills and he will enter a dual enrollment program with a community college in the fall. He plans eventually to pursue a degree in meteorology.

“I’ve made several lifelong friends at AIDB,” Henson says. “We’ve been together for years and we’ll always be together.”

Several people talk about programs at various AIDB facilities available for adults that teach independence and life skills, academics, computer skills, and more. The Alabama Freedom Center for the Blind teaches traveling skills. A Business Enterprise program at E.H. Gentry teaches the fundamentals of being an entrepreneur.

Steven Forney, a UAH research engineer at the Center of Cybersecurity, graduated from AIDB in 2003 and attended E.H. Gentry school before going to the Rochester Institute of Technology to study electrical and mechanical engineering. Forney then earned his masters degree in human computer interaction.

“Education at ASB prepared me for real world experiences that helped me succeed in college, Forney says. “The ratio of staff – the opportunity to learn one-on-one – is really important, and much more available at ASB than at public schools. I could also play football on the front lines at ASB – which I probably couldn’t have done at a public school.” Forney teaches younger students about cyber security issues and shows viewers AIDB’s “STEM-Mobile” which travels nationwide to help students gain information on STEM careers.

Mother Kristen Wilburn, whose child was diagnosed with hearing loss, talks about early intervention, Mommy and Me classes, ASL classes, and Kinderprep programs at AIDB.

John Mascia, director of AIDB, introduces Alabama Industries for the Blind. The majority of employees at the $30 million facility are blind or visually impaired. The facility provides employment opportunities as well as quality products for the government, mostly for the military. “These workers want to be taxpaying citizens,” Mascia says. “They don’t want to take from society, they want to give back, and they do so every day.”

Alabama Institute for the Deaf and Blind is a special presentation of APT's series SPOTLIGHT ON AGRICULTURE, produced by Mike Ousley.